Trebuchet is large stone thrower used by the Kingdom of Hyrule. 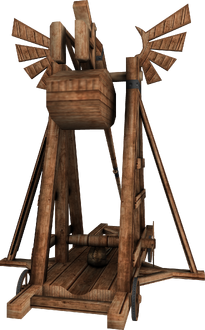 These towering siege weapons were deployed by the Kingdom of Hyrule during invasions of enemy cities. They could hurl giant flaming boulders with tremendous force and knock down the most sturdy of fortifications. Any enemy soldiers unlucky enough to be near the impact of these projectiles were usually crushed or burned in the resulting shockwave.

Retrieved from "https://hyruleconquest.fandom.com/wiki/Trebuchet?oldid=39019"
Community content is available under CC-BY-SA unless otherwise noted.