Town Lookouts become stationary. While active, their line of sight increases by 15%, they gain the Detection Bonus, and their line of sight cannot become negatively affected by any other ability or weather. If hit by an attack, this ability toggles off.

The Town Lookout is the citizen soldier missile unit for the Kingdom of Hyrule. 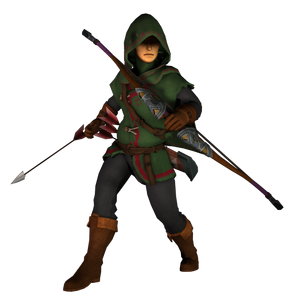 Woodland hunters, rangers, and guides, during wartime Town Lookouts are called to served as perimeter guards and lookouts of Hyrule's outermost cities. Armed with a bow and arrow, these fast citizens can attack enemies from afar and make good use of their hunting skills to provide food to armies.

Retrieved from "https://hyruleconquest.fandom.com/wiki/Town_Lookout?oldid=39010"
Community content is available under CC-BY-SA unless otherwise noted.