View source
watch 01:36
We're Getting Mutants in the MCU - The Loop
Do you like this video?
Play Sound

Not to be confused with the Kingdom of Hyrule.

The world of Hyrule is one of the three main settings of Hyrule Conquest and its expansions, the other ones being the Realm of Twilight, another planet in the cosmos, and Termina, Hyrule's afterlife. Hyrule is known to denizens of the Realm of Twilight as the World of Light. Hyrule serves as Hyrule Conquest's unplayable ''Gaia'' faction, controlling wildlife and other unaffiliated beings.

Hyrule's origin is shrouded in mystery, with many religious narratives and myths describing the Creation of Hyrule, and the ensuing Age of Myth as nebulous, chaotic times when the world was a hostile place dominated by Dragons and other great beasts. The Age of Myth ended with the coming of the Seven First Sages and Three Oracles, who are said to have brought order and civilization to the peoples of Hyrule. However, the First Sages coveted the Triforce, and waged war on one another, perverting nature to create armies of servitors. Of them only Sulkaris, The First Sage of Forests, remained loyal to her purpose, steadfastly guarding the holy relic from her siblings. Unable to defeat one another, the Sages unleashed the Demons of Old into the world, hoping that they could be used as weapons against each other. However, the Druthulidi quickly proved to be uncontrollable, threatening to devour all of Hyrule, and, to save themselves the Sages sold Hyrule to a darker power, Majora. In exchange, Majora destroyed or drove the demons into hiding, and the First Sages tenuously united and overpowered Sulkaris, sending her into exile to preserve the illusion of their immortality. 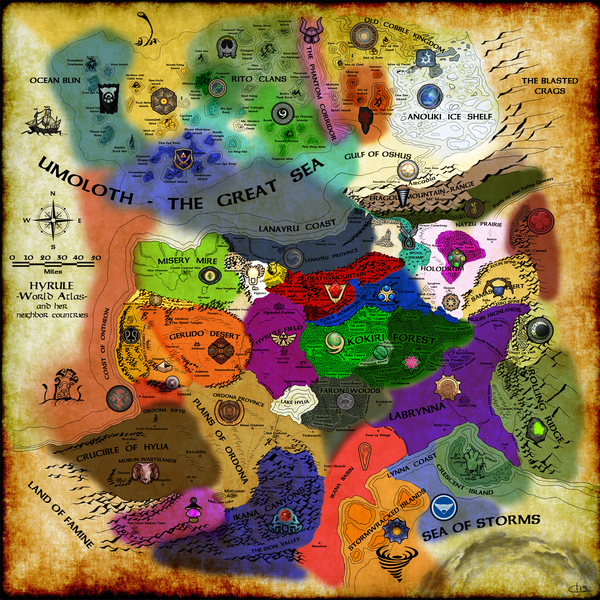 Hyrule is a terrestrial planet of unknown size, largely covered in water. The only known continent on the world is also called Hyrule after the planet; the existence of other continents is unclear. The region of Hyrule lies at a natural isthmus between two larger regions of the continent. To the north and northwest of the continent lies the vast ocean known as the Great Sea. There are more unexplored lands to the southwest known as the Land of Famine, but a large mountain range inhibits travel. Beyond Holodrum in the northeast extend large plains that extend to the former territory of the Cobble Kingdom, boasting a river wide enough to allow ship traffic into the Great Sea. To the southeast of Hyrule is a ocean known as the Sea of Storms, which seems to feature a semi-permanent global storm system. High in the skies is the Sky City of the divine Oocca.

To the west of the Kingdom of Hyrule lies the arid, thinly-populated Gerudo Desert, but nonetheless is home to the once-powerful empire of the Gerudo. The Gerudo Desert is separated from the ocean to the west by the Gerudo Cliffs, where the ancient Darknut people dwell with their close allies, the Zuna, Fokka and Mazura.

The southwestern lands are inhabited by the Blins, a loose confederacy of barbaric pig-like peoples who in the past used to have a unified empire rivalling that of the Hylians. Once a fertile plain much like Ordona is, the crusade initiated by Hylia five millennia past has burned the Blin Kingdoms to the ground, and millennia of war with the Hylians couldn't help either.

The jungle-like swamplands to the northwest are appropriately called the Misery Mire. Separated from the eastern and southern lands by mountains, it is the land of the insidious Gohma, the last remnants of the Druthulidi Iemanis.

East of Hyrule and Ordona lies the great Kokiri Forest, the only place where the ancient Deku Trees can be found over Hyrule. It used to be the home of the great Huskus Empire, until the war with the Gohma devastated their race and reduced their race to a handful of survivors living deep in Palagard's Sanctuary. The Kingdom of Hyrule ruled this land for a period of time, but it was never prosperous because of its remote location until the Kokiri Bandits annexed it and later got transformed into the Kokiri by the Great Deku Tree.

The smaller, conifer-dominated Faron Woods lie to the south of the Kokiri Forest, where the Lizalfos dwell after being driven away from their homelands, Death Mountain. The eastern woods, meanwhile, is home to the Deku Scrubs, a race of small, angry, bickering people considered by many others to be pests.

North of the Kokiri Forest is the lake-dominated Dominion Valley, where the Oshunite Jabun established the Zora Dominion. It is the source of the Zora River, a valuable source of fresh water for all the races of Hyrule.

The northern coast of the continent of Hyrule is the haven of the half-breed Hylian-Zora hybrids, where they live safe from the prosecution of the purebloods from both the Kingdom of Hyrule and the Zora Dominion. The coastal region is rich in coral, and sits on one of the largest rupee mines of the planet.

Sandwiched between Hyrule Field and the northern coast lies the volcanic Death Mountain range. It is home to many races: Gorons, Dodongos, Volvagians and Lizalfos, among others, and is extremely rich in both gems and rupees.

To the far southeastern reaches lies the vast expanse of Labrynna. It has remained largely unaffected by the bloody and savage wars of the past. The Labrynnian people have developed peacefully for centuries, only having to fend off smaller tribes of hostile natives to expand their empire. East of the vast expanse of Crown Ridge is an arid land of which little is known. South of Labrynna is Crescent Island, where the reptilian Tokay dwell.

North of Labrynna is the hidden Samasa Desert. Deep inside it is the Subrosia Core, home to the reclusive, xenophobic Subrosians, who make a living out of mining.

The farthest northeastern land is called Holodrum. Formerly inhabited by the Wind Tribe and the Tarminians, it is now owned by the Fairies of Tarm, a mysterious race of tiny beings, and the peaceful Horonians, who might or might not be the ancient Tarminians' descendants. The Eragou Mountain Range separates Holodrum from the Gulf of Oshus to the north, while the Path of the Fairy Queen leads from the Natzu Prairie farther northeast to lands unexplored.

South of Ordona are the mountainous Ikana Canyons. Once the highland home to the Kingdom of Ikana, it is now a dead wasteland of barren earth and petrified forests after Ikana mysteriously vanished from Hyrule.

The ocean to the north of the continent is known as the Great Sea, called Umoloth in the Hylian language. The islands of the central Great Sea are dominated by the kingdom of the Rito Clans, who boast the most powerful state in the ocean. The tribes of the Lost Gorons, who left Death Mountain many millennia, settled in a smaller eastern archipelago; while the west is a land of constant conflicts between the Ocean Blins. The Anouki and the Yook share control of the Isles of Frost, a smaller, cold, arid, mountainous archipelago farther to the east, separated from the Blasted Crags beyond Holodrum in the mainland by the Anouki ice shelf. The south was mostly uninhabited until the arrival of Hylian and Korok Colonists. The north is the lair of Bellum's minions: the northeast is the last remnant of the vestigial Cobble Kingdom, while the rest of the dark god's followers inhabit the empty polar seas far to the north.

Hyrule boasts one major fresh body of water, Lake Hylia, which also serves as it major source of aquatic trade. Lake Hylia is fed by the River Zora, which begins at the Jabun Reservoir in the Dominion Valley before crossing Hyrule Field and branches west into the Gerudo Desert before turning south and feeding into the lake. The continent also has a series of small lakes along the border of Dominion Valley, Holodrum, and Kokiri Forest known as the Turongo Lakes as well as Eyeglass Lake to the west of Horon; to the far South lies the small Lake Malcove. Numerous major rivers cross the continent of Hyrule, including: The Zora and Lanayru Rivers that cut across north-central Hyrule; The Kano, Palagard, and Picorou Rivers in Kokiri Forest; the Talus, Yoll, and North and South Nuun Rivers in Labrynna; and the Natzu River in Holodrum. Additionally the ancient Ikana river once flowed through the Ikana Canyons into the Sea of Storms before the Kingdom's disappearance, upon its descent into Termina the river dried up, leaving only the dry Ikana Basin.

Extinct species marked with a * were absorbed into Termina by Majora.

Species originally native to or who immigrated to worlds beyond Hyrule, such as the Realm of Twilight or worlds conquered by the Druthulidi.

Beings, that, while not technically alive, function with a similar animation, and may be governed by an intelligence.

Community content is available under CC-BY-SA unless otherwise noted.
Advertisement