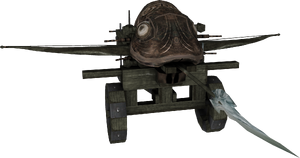 Serving as the Province's main siege weapon, the Coralmold Ballista could fire a powerful bolt at a high velocity. The coralmold tip was strong enough to puncture almost anything, be it a stone wall or a column of heavily-armored enemy soldiers. If aimed proprely, a single shot from the Ballista could impale nearly a dozen enemy soldiers at a time.

Retrieved from "https://hyruleconquest.fandom.com/wiki/Coralmold_Ballista?oldid=39134"
Community content is available under CC-BY-SA unless otherwise noted.