Berserker lights itself on fire, doubling its Fire damage and dealing consistent Fire damage to any enemy adjacent to itself, however the unit's HP slowly begins to drain. If a berserker dies while Ignite is toggled, they will self-destruct and deal Fire damage to everything within their radius.

Berserkers are lightly-armoured Gorons who serve as shock troops in battle. They are exclusively used by Darunia. 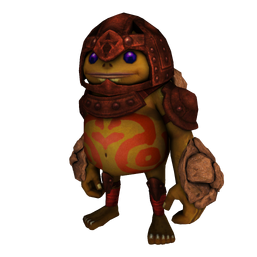 Berserkers are individuals that have devoted their lives to indulging and mastering control of anger, which the Gorons have long considered a danger due to their tendency to lose control during fits of rage. On the battlefield this was less of a problem, and Berserkers could unleash quite a flurry of punches when worked up into a frenzy.

Retrieved from "https://hyruleconquest.fandom.com/wiki/Berserker?oldid=39000"
Community content is available under CC-BY-SA unless otherwise noted.