Arurodas are a species of giant scorpions, descended from the ancient Gohma, native to Lanayru Province. 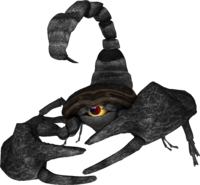 Scorpion beasts native to the sands of Lanayru, Arurodas are considered an extremely dangerous pest by many civilizations in Hyrule. The Zora of Lanayru Province have found ways to adapt and avoid their aggressive seasons and rarely run into problems with the creatures. If caught at a young enough age, Arurodas could be domesticated and used as beasts of war.

Retrieved from "https://hyruleconquest.fandom.com/wiki/Aruroda?oldid=40982"
Community content is available under CC-BY-SA unless otherwise noted.